A short history of the Parkkerk

The Parkkerk was taken into use in the Gerard Brandtstraat, at one of the entrances to the Vondelpark, Christmas Day 1918. 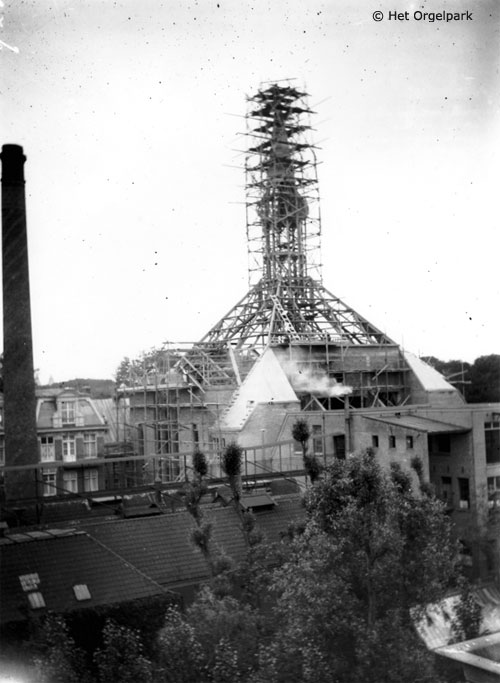 It was built as a typical reformed church on a central square floor plan and using mainly brick, after a design by E.A.C. Roest. The church has a high roof covered in slates with a steeple on top. The verger housing has been integrated into the church façade, serving as a transition between the homes in the Gerard Brandtstraat and the church. The design refers to Roman style, shown by the three coupled large windows with round arcs and the lower similarly styled windows on either side. All windows originally featured dark brown and ochre-coloured stained glass.

Even though the look as a whole is sober, the architect has managed to achieve a great sense of spaciousness – the rigid geometric ceiling is one of the ways in which this was done. Upon entry the church has the aura of a theatre, with the balconies situated around the pulpit. 1400 worshipers were able to attend the services. In 1922, not too long after the church’s opening, the Sauer firm installed an organ. This instrument still has an essential place in the church’s interior.

The Parkkerk played an important part in the history of the Protestant church because of Dominee Geelkerken’s sermons. In 1923 he claimed that the snake speaking in Genesis 3 should not be understood literally, but rather as a metaphor. 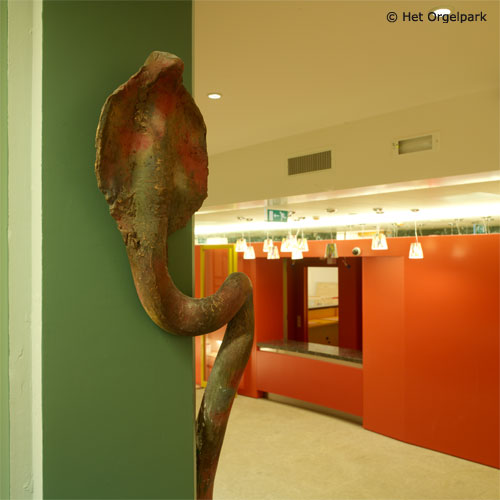 The Parkkerk played an important part in the history of the Protestant church because of Dominee Geelkerken’s sermons. In 1923 he claimed that the snake speaking in Genesis 3 should not be understood literally, but rather as a metaphor.

The Extraordinary Synod suspended Geelkerken for a period of three months, but the Amsterdam consistory did not agree with this. The ‘Gereformeerde Kerken in Nederland in Hersteld Verband’ stemmed from these disputes, with the Parkkerk at the centre. Dominee Geelkerken continued preaching in the Parkkerk, causing thousands to flock to the church. Dominee Buskes’ sermons also contributed to this increase in worshipers. Nevertheless, the Hersteld Verband turned out not to be viable, and joined the Dutch Reformed Church after World War II.

New uses for the Parkkerk

Up until the spring of 1994, the Parkkerk functioned as a church. In 1995, Stadsherstel (then called Amsterdam Monument Fund) took the building off the Reformed church’s hands. Even though no definite purpose for the building had been set, the church was used intensively. In a very short timeframe it was turned into a dance studio; a shower area was added and the heating system was updated. Three companies used the church hall from early morning to late at night, seven nights a week. It served its purpose well, even though the surroundings remained a bit ‘shabby’ for the dancers and no money for restoration was secured. The gains from the dance studio rental were too little to put them to that use. An IT company moved into the large lower floor (half basement level) that stretches out over the length of the church. 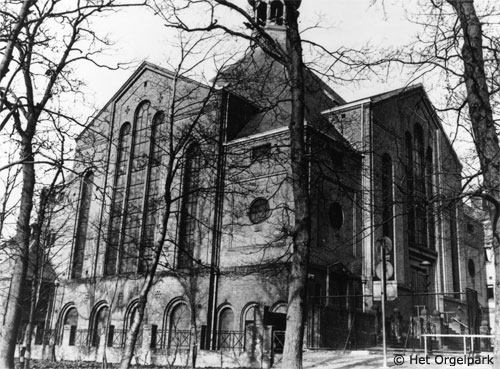 During this period, the Netherlands Wind Ensemble was actively researching the possibilities for settling in the Parkkerk. TV producers also showed interest; this is not surprising, as the Parkkerk’s central hall and balconies emanate the feeling of a theatre. Despite the building’s sober architecture, architect E.A.C. Roest managed to provide the visitor with an impressive and spacious experience in 1918. In such surroundings the religious experience is present in a less intrusive manner than in richly ornamented Catholic churches.

Even though a large amount of the dancers eventually moved to the House of Dance in the city’s East/Watergraafsmeer quarters, they also researched the possibilities to stay in the Parkkerk permanently. All initiatives eventually proved too weak to permanently house an organization in the church that would also be able to afford the rent after restoration.

At this point, the Utopa Foundation presented a plan that seamlessly fit the church, and which would provide enough revenue to restore the church and give it a new focus. The Orgelpark Foundation was founded. This took place in the fall of 2003, and from then on everything happened quickly. Engineering office Delfgou had already made a restoration plan of the building’s skeleton and structure; architectural firm BD-Architectuur took on the interior and entrances of the building. 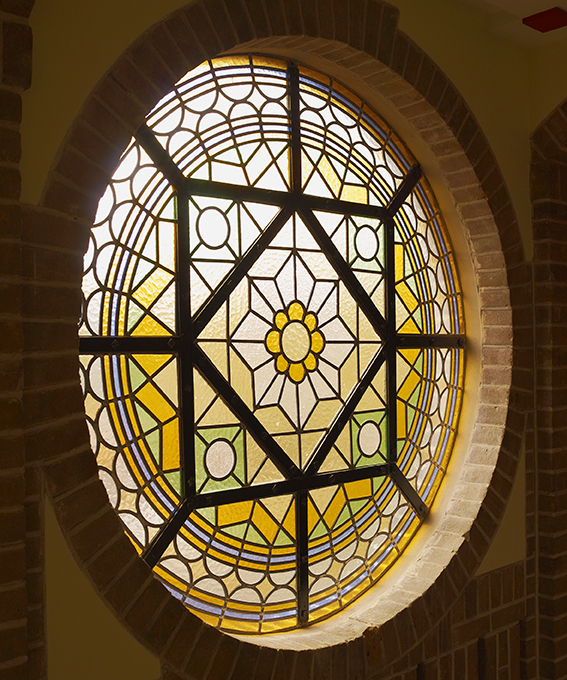 At the same time, a restoration plan was set up for the Sauer organ, housed in the building. This pneumatic organ is a national monument, and together with the organs in the Nicolaas church and in Oost Kapelle belongs to the oldest still-functioning Sauer organs in the Netherlands. It was restored by organ builder Elbertse from Soest.

Utopa is a foundation that aims to ‘provide people with chances’. In this case, Utopa focuses on presenting the organ in a new way and thereby integrating it into musical life. The Orgelpark works with a broad range of activities, such as commissioning compositions, providing study facilities and organizing concerts, masterclasses and symposia. The programming connects the organ to other instruments, genres and disciplines.

The Parkkerk’s skeleton has been fully restored: that is to say, it has been returned to its original state. Architect Bas van Hille from BD-Architectuur has transformed the former church into a theatre. 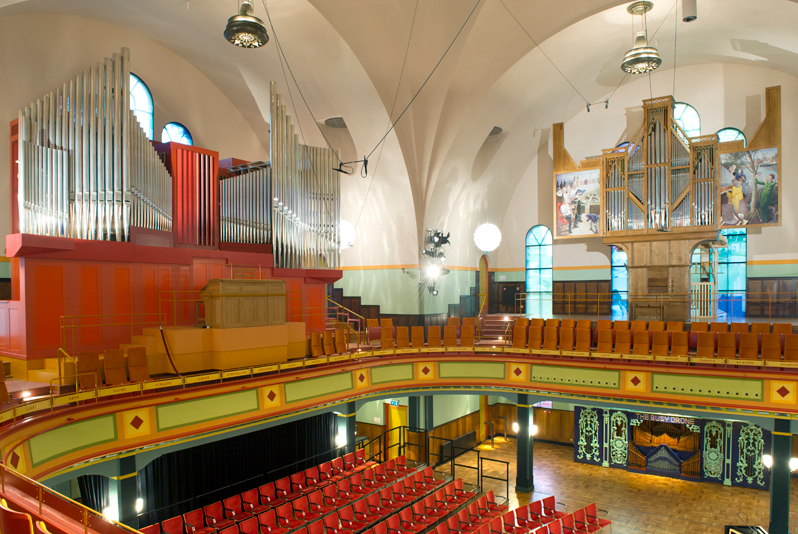 Even though the space of the concert hall (the former church hall) was left fully intact, it looks vastly different from before. Three important interventions determine the new look. First of all, adding over forty colours in combination with festive lighting has given the previously white interior a cheerful nightlife atmosphere. The second spectacular element is the large window unit, which used to be stained glass. The windows have been soundproofed and fitted with coloured foil depicting three themes related to the church’s history, the building and restoration process and the organs. Finally, a heating and ventilation installation has been added to the hall; it has been rendered almost invisible through its placement in the balcony edge, and underneath the balcony as well as the new balcony steps.

In addition to the beautifully restored Sauer organ, over time the seven newly installed organs also have an important impact on the space.

The entrance and foyer 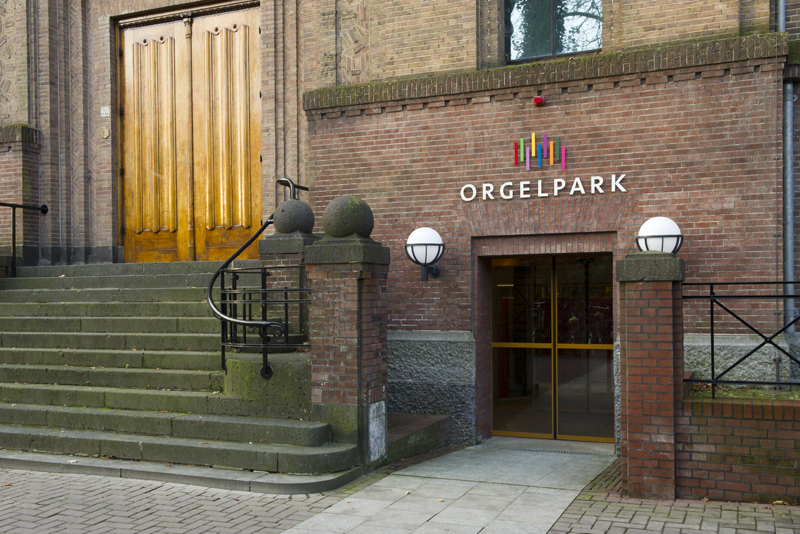 Entering the Orgelpark is completely different from how it used to be. People used to enter the church directly over the monumental outside steps and through the large doors. Visitors now enter the building on street level through two entrances on either side of the cloakroom in the foyer. From there they can take one of the two original stairs or the newly installed elevator to the concert hall. When starting the building’s restoration, the basement level plan was already different from the original situation. After removing all the space dividers a central block was installed containing restrooms, installations, a box office and a serving counter. The foyer wraps around it and now gets outside light from all sides of the building.

In many theatres and concert halls you can observe a curious phenomenon during intermission: men quickly finish their toilet visit while the last women in line are bound to miss the start of the concert's second half. The Orgelpark has therefore installed a larger number of toilets for women than for men. Furthermore, the entrance for men and women has been turned into one shared area. Through the use of colour and light this shared entrance has become a surprising and functional space.