The Orgelpark’s barrel organ is one of the most remarkable in the world: contemporary composers such as Louis Andriessen and musicians like Willem Breuker have composed music specifically for this organ.

The instrument was built in 1924 by the Mortier firm as a dancing organ for a Belgian café. In 1964, Antwerp barrel organ builder Bursens put it up for sale. Amsterdam-based publishing company De Bezige Bij bought it in 1965, to use it during the then yearly book convention in the RAI. Graphic designers Alexander Verberne and Karel Beunis came up with the idea to purchase the organ. Artist Peter Struycken designed its new colours, Verberne the design of the organ’s lettering.

In 1973, The Busy Drone was located in the auditorium of the Stedelijk Museum in Amsterdam. It played a role in the concert series ‘Muziek van Nu’, or ‘Contemporary Music’. At the start of the museum’s restoration it was decided not to keep the organ in that spot; it spent a year in the Nationaal Museum van Speelklok tot Pierement. Foundation The Busy Drone commissioned Leon van Leeuwen from the Perlee firm in Amsterdam to restore it.

The Busy Drone has 92 keys and 17 registers. The disposition of a barrel organ is usually beautifully set out on a special map, showing which of all those keys corresponds to which division. There are four divisions: two Melody divisions, Accompaniment and Bass.

In the fall of 2009 the Orgelpark adopted The Busy Drone. The tradition to compose new music for the organ, started by Verberne and Beunis, is still going strong.

Composers wishing to write for the instrument can find more information here. 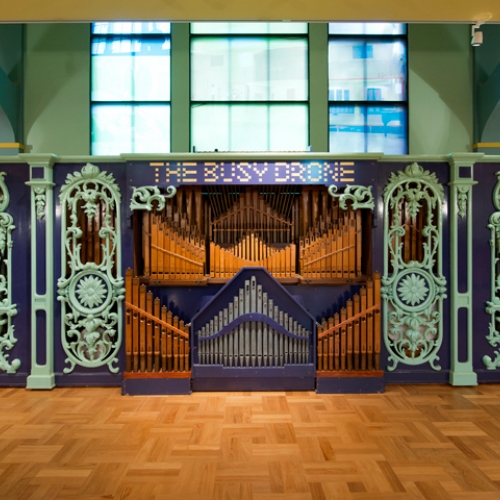