The Utopa Baroque Organ has been developed by the Orgelpark. It was built in cooperation with four organ building companies: Elbertse Orgelmakers (Soest, NL) built the case, the wind work, the action and part of the wooden pipes; Hermann Eule Orgelbau (Bautzen, Germany) built the metal pipes and the other wooden pipes; Sinua (Düsseldorf, Germany) developed and built the hard- and software of the digital action; and Munetaka Yokota (Tokio, Japan) was responsible for the voicing. The Utopa Baroque Organ was inaugurated on March 21st, 2018.

The sound concept of the Utopa Baroque Organ is inspired by that of the Hildebrandt organ in Naumburg (Germany). Hildebrandt was a colleague and rival of Gottfried Silbermann, who built organs in Johann Sebastian Bach's time and region as well. The Orgelpark decided that Hildebrandt's less loud and more sophisticated soundworld would fit the Orgelpark hall best.

The Orgelpark needed a baroque organ in order to facilitate historically inspired performances of the music by Bach and contemporaries on the same level as the music by Max Reger c.s. (on the Orgelpark Sauer organ from 1922), César Franck c.s. (Verschueren organ, 2009), and older music (Van Straten organ, 2012).

At the same time the Orgelpark demanded that the new organ would inspire 21st century music as well. Therefore, it has been equipped with spring chests inspired by the chest built by Arp Schnitger and his master Berend Huss in Stade (1675). The tone drawers in these chests provide a pallet for every single pipe, and allow to operate thes with little computerized magnets. This means that the windflow from bellow to pipe remains uncompromised.

In order to play baroque music historically inspired, the Utopa Baroque Organ is equipped with a mechanical console (stop action electric, with a sequencer system). In order to be able to access the options the magnets offer, the organ has a seperate digital console as well. The Sauer organ is connected to this console also. You may find more information on how the console works and can be operated on this page.

On the digital console any stop of the Utopa Baroque Organ (and, to some extend, of the Sauer organ) can be chosen on any manual (or the pedal). Stops can be transposed easily. The basic principle is that every manual can have more than just one registration; the number of registrations is virtually unlimited.

In order to show organists how to use the digital console, the Orgelpark developed a User Manual, available here.

In order to show musicians/artistis who like to play the digital console by using laptops and other control devices, the Orgelpark assigned composer Wouter Snoei to develop a user manual, which is available here.

This movie gives an impression of the way the build of the Utopa Baroque Organ was prepared. 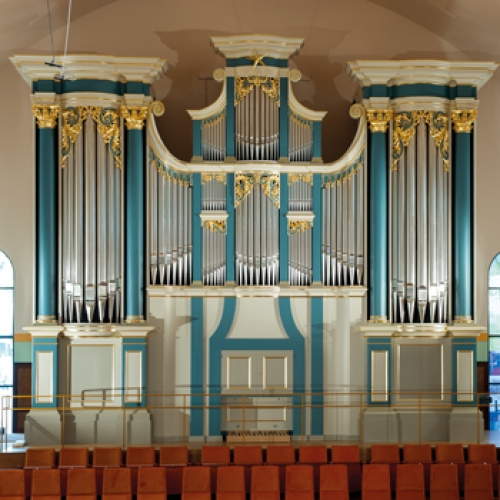