An organ from 1479 is featured on the balcony above The Busy Drone. Or, to be precise: a copy of the organ that Peter Gerritsz built in the Nicolaï church in Utrecht in that year. Several essential parts of this original organ have been preserved: for example the case, the Blokwerk, several technical parts and a sizable amount of pipes. That this has been saved at all is due in part to the Vereniging voor Noord-Nederlandse Muziekgeschiedenis (now called the Royal VNM), who ensured that the organ would not be demolished and instead got a spot in the Rijksmuseum in Amsterdam in the 1880s. 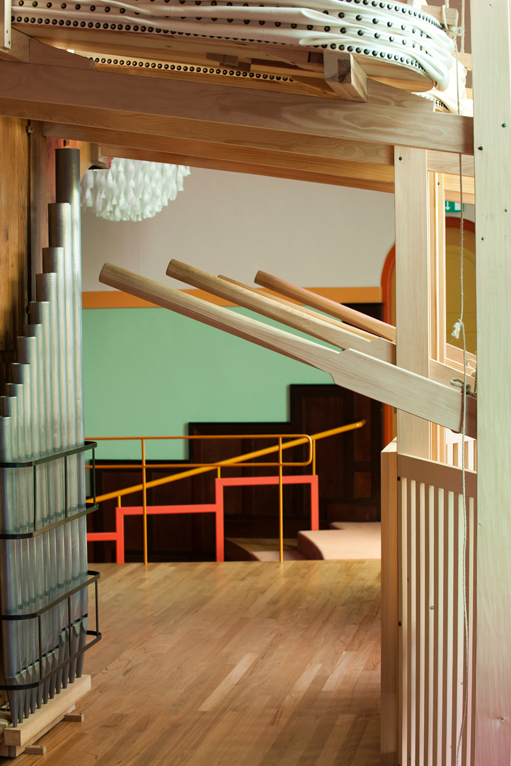 The organ specialists from the Cultural Heritage Agency of the Netherlands (RCE), Rudi van Straten and Wim Diepenhorst, have been exceptionally careful with this special organ. In the context of possibly returning the organ to its original place in the Nicolaï church in Utrecht, the RCE decided constructing a copy of the original organ would be a wise decision. The Orgelpark supported this plan by commissioning Orgelmakerij Reil in Heerde to build this copy. The Orgelpark decided to name the copy the Van Straten organ in honour of Rudi van Straten. On the basis of minute research into the saved parts from 1479, Wim Diepenhorst set up a building plan. The result is an instrument that mirrors the sound of the late Middle Ages: unique in the world.

The copy has, just like the 1479 original once had, two manuals (with wider keys than usual). The lower manual (the ‘Great’) is a Blokwerk, or ‘block work’. This means that there are no registers: the lower key always sounds seven pipes. This amount increases as you go higher: the highest key sounds 18 pipes. The second manual (the Bovenwerk) is a Blokwerk as well, albeit a slighter younger type: one row of pipes is able to sound separately here, so that there are three sounds: a clear sound from the entire block work, a duller sound from just the one row of pipes (therefore called Doof, which is Dutch for dull), or both at the same time. As an added bonus the Bovenwerk has a Cymbel. The pedal clavier has its own pipes: the ‘Bourdonnen’.

The organ has shutters, as was common in the Middle Ages. The function of these shutters was three-fold: a practical function (protection from dust), a liturgical function (e.g. keeping the organ closed on occasions such as Good Friday), and a decorative function (the organ shutters were often richly illustrated). In the context of this tradition, the shutters of the Van Straten organ have been painted as well. The Orgelpark commissioned Kik Zeiler to do so, known for int. al. his portrait of the gentlemen’s club around Harry Mulisch.

Download the disposition of the Van Straten organ (in Dutch). 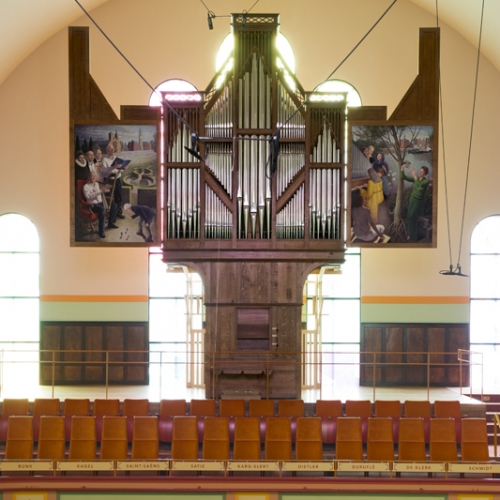